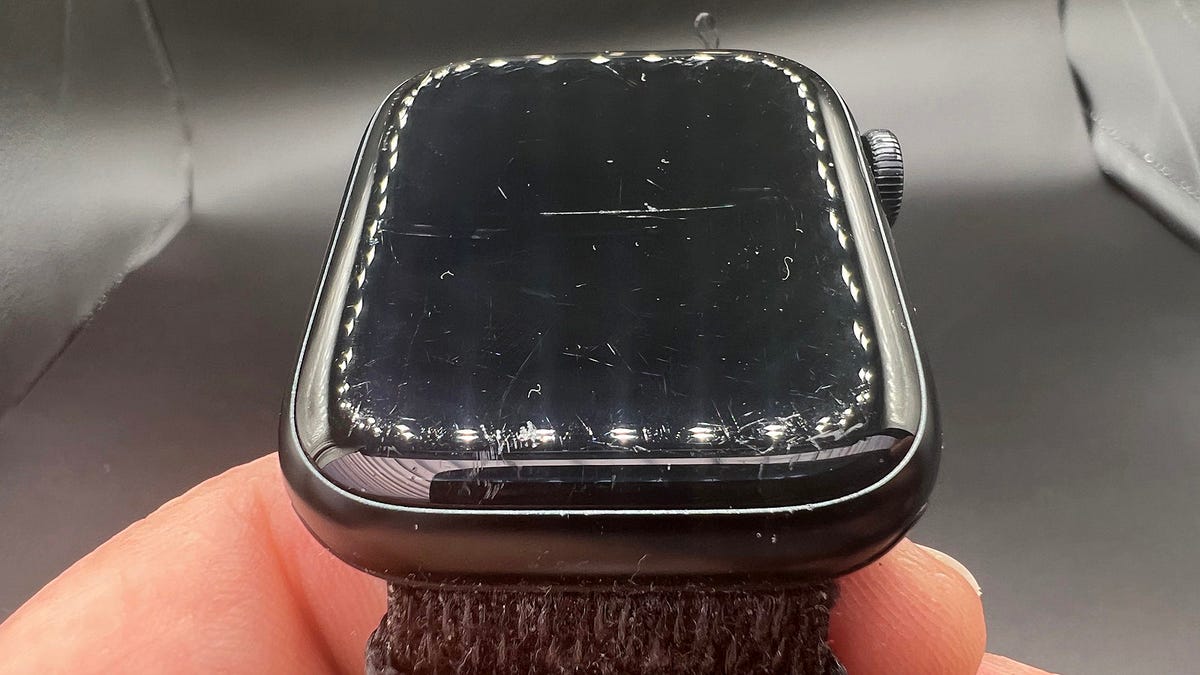 I’ve had my Apple Watch Series 7 for a little under a year.

It’s the fourth Apple Watch that I’ve owned. But this time around I decided to do something different.

Encouraged by Apple’s promotional material for the Apple Watch Series 7, and the ruggedness of the display, I decided to not put it in a case.

I mean, take a look at this promotional video. Apple really made a big deal of the durability of the display.

Now, it’s important that you’re aware that Apple uses two different materials for the display. Ion-X glass is used on the aluminum models, and sapphire is used on the stainless-steel models (and on the titanium Apple Watch Ultra).

Also: I put the Apple Watch Ultra through a Tough Mudder: Here’s how it held up

Since the aluminum models are the cheapest, these are likely to be the most common models.

And that’s the model I’ve been wearing for 11 months.

So how durable is the Ion-X glass?

In my experience, not very.

Yup, those are scratches.

The aluminum case has also taken a number of dings.

While most of these scratches are cosmetic, that one going across the middle of the display is deep and I can feel it when touching the display.

Now, some background. This Apple Watch has been worn pretty much 24/7 for 11 months, with me only taking it off for charging.

Where I’ve been, this watch has been.

I’m also not overly careful with things. That said, I don’t go out of my way to damage things either. But I do spend a fair bit of times outdoors, or with my hands inside engine bays and PCs. And throughout all that, that display is in prime position to get hit and scratched.

The Nike velcro strap has also taken a beating. It’s looking a little rough from where it’s caught on things (undergrowth is especially bad for it). I tend to either apply a flame or a dab of crazy glue to any loops of frayed material to seal it and stop the strap unravelling.

Another problem is the velcro itself. In the beginning this was quite strong, but after a year it’s now weakened to the point where it will accidentally undo. Even cleaning the little velcro hooks with a needle doesn’t help any more.

OK, so you’ve bought an Apple Watch and don’t want it to look like mine after a year. What should you do?

What I used to do — and will likely do from now on — is put it in a case. Yes, we put our smartphones in cases, so why not our smartwatches?

The case that I’ve had the best luck with is the Spigen Rugged Armor.

This is a sleeve that fits around the Apple Watch, cocooning it in a flexible and shock-absorbent TPU (thermoplastic polyurethane) layer. The raised bezels around the display offers a lot of extra protection without the need for a screen protector.

All of my previous Apple Watches have been in a Spigen case from day one, and it’s gone a long way to protect them from damage.

And the sleeve has cutouts for the buttons and speakers, so you’re not losing any functionality from using it.

I do recommend taking your watch out of the case to clean occasionally because dirt can build up, and this did once cause a button to stick down (which I loosened by cleaning the watch with warm, soapy water).

If you want to keep your Apple Watch looking like new for longer, I highly recommend this case.