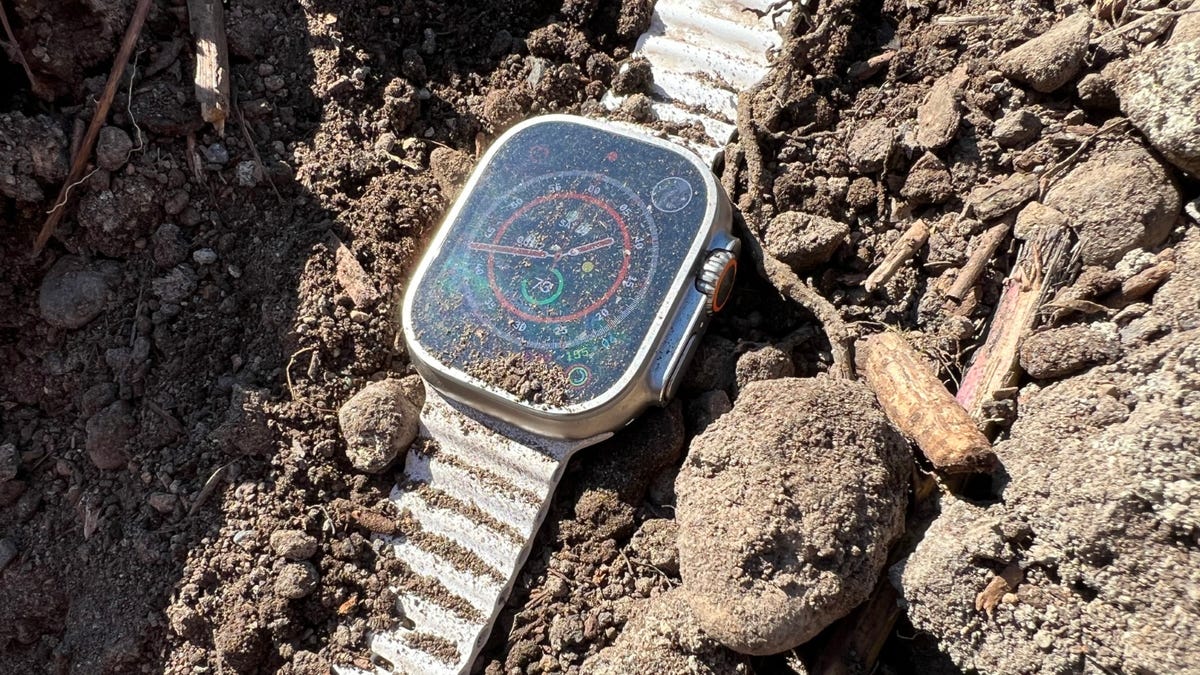 Apple advertises the new Watch Ultra as its most rugged and capable smartwatch ever. Naturally, as a sports watch enthusiast and owner of a few too many wearables, I was intrigued by the company’s foray into the niche but important segment and bought one for myself.

What I like a lot about the Apple Watch Ultra is that while it’s powerful enough to get through the most intense environments, it’s just as reliable as a standard smartwatch.

That said, the goal of this review is not to tell you whether or not the Apple Watch Ultra can sustain the typical jog at the park. Instead, for a watch so rich in durability and fitness features, I figured, “Why not treat it with the ultimate durability test?”

The annual Tough Mudder 15K event pushes you to hurdle, climb, swim, duck, and dive through a series of ruthless challenges, including an ice-cold water pool full of shocking “Electric Eels” and mountains of mud-filled barricades. It’s an ultra-level marathon for an Ultra smartwatch.

After everything was said and done, I can still barely make it up and down the stairs and the cuts and bruises throughout my body are unrelenting. As for the Apple Watch, you’ll want to read on to see how it’s held up.

The Apple Watch Ultra has a titanium case with a flat sapphire crystal glass display and ceramic back cover. That’s a recipe for a durable and rugged smartwatch. The digital crown is larger than ever and is a part of the watch that bulges from the right side. It, too, is a new aspect of the Apple Watch design and one that is much needed for the tactility and feedback of the buttons.

The left side has an additional Action button that you can customize to your preferred function. I ran the Tough Mudder with gloves and was able to operate the watch without removing them. This level of access and control is very important when cooler temperatures, wet conditions, and other environmental factors take place.

There are two new speakers built into the frame of the watch which kept me updated on one-mile splits during the 15K. (Thankfully, I never had to test the siren feature.) I did, however, receive a warning after a couple of hard falls while jumping over deep mud pits, but I was able to clear that every time and let the Apple Watch know that I was OK.

I’ve never had the fall detection go off on me before, but these jumps and landings were quite forceful, and one even took away my breath for a few seconds, so it was actually great to see this function work — even though I never intended to see it in action.

I had quite a routine during the 15K. First, I locked the Apple Watch’s display because of the level of activity and wrist movement. When I did need to use it, I’d push the Digital Crown to clear water out of the watch and unlock the display. There were moments when I’d miss-tap and accidentally stop a workout, but I’d chalk that up to the Apple Watch being a few days old at the time.

The Apple Watch Ultra is tested to MIL-STD 810H, with IP6X dust resistance and 100-meter water resistance. I tested the first two durability features, but only went down about five feet in the water during the 15K. That said, I’ve read accounts by fellow journalists regarding the diving experience with the wearable and the sentiment is generally positive.

See also: What is the best sports watch and how does Apple Watch Ultra compare?

Let’s look at some of the environments and conditions that the Apple Watch Ultra took on:

While it was advertised as a 15K, both the Apple Watch Ultra and COROS Vertix 2 I wore plotted out my total distance at about 8.5 miles (or 13.68K). The run involved grassland and heavily wooded areas, but the GPS tracking was almost exactly the same for both watches, which is great. One new feature on the Apple Watch Ultra that should be more present on other models is Precision Start. This simple feature lets you confirm that a GPS fix has been applied to your run prior to starting any countdowns.

The White Ocean band was comfortable and flexible enough that it did not cause any binding or discomfort while climbing over walls. Better yet, it didn’t show any wear from rubbing against the edges of rocks and sharp edges.

There were several obstacles where I had to crawl on my hands and knees over rocks, in mud, and through the water. One included a chamber with extremely strong mentholated vapor that made my eyes water. I thought for sure the rocks and dirt would cause scratches all over the Apple Watch Ultra, but the display and the sides ended up looking flawless, with just a couple of very minor scratches in one front corner.

There were several obstacles with water — some with very cold ice water — and the Apple Watch Ultra’s self-cleaning feature worked perfectly. A press-and-hold on the Digital Crown triggered the speakers to sound, vibrate, and shake out any water that seeped into the wearable.

Most of the water events in the race were dyed, so there was little to no visibility when I sunk in. Thus, I was not able to test (or see) any of the water depth features of the Apple Watch Ultra. My GoPro actually fell off my head in one obstacle and I dove with my eyes closed for more than 30 seconds before I recovered it. Thankfully, both the Apple Watch Ultra and GoPro were still functioning.

Similar to wall climbing, I expected my wrist to be affected by the watch when grabbing and swinging on various forms of monkey bars. Typically, with rugged-style watches, the bulkier hardware can jab into your skin if your hands are angled. While I fell off numerous times during the obstacles, the cause had more to do with my strength and grip, and less with the watch.

Crawling through the water with 10,000 volts of hanging cables wasn’t something to look forward to and I was definitely rocked by the charges. Thankfully, the Apple Watch Ultra seemed unaffected by the shock therapy and kept on tracking my heart rate — as it was spiking left and right. Perhaps there’s a shock-resistance factor that Apple isn’t telling us about?

The Apple Watch Ultra captured my heart rate throughout the event and, compared to the COROS Vertix 2, averaged 3-5 bpm more. I did not have a chest monitor to compare the measurements, but the Apple Watch was certainly reliable enough to track my progress throughout the 15K and should hold well for less hectic scenarios.

By the time I completed the 15K, the white Ocean band was caked in mud (see before and after below) and I had to run a probe through the holes in the band to get it all out. Still, the band fared generally much better than I anticipated, and after using it for this event and wearing it around, I would order this style again — even if I’m not diving.

My Apple Watch Ultra arrived the day before my Tough Mudder event so I set it all up and then started the next morning with 100%. I drove just over 30 minutes to the event site and then had about 45 minutes before the start to park, check-in, stretch, and talk with my team.

I started the 15K event with GPS running, a T-Mobile cellular signal active for staying in touch with my family, and the heart rate monitor in the background.

After two hours and 40 minutes, the Watch Ultra was down to 76%. This works out to 9% consumption per hour, which is pretty high. Generally, you can expect 4-6% battery loss per hour, according to a fellow journalist, Ray Maker’s review, but the active cellular connection surely increased my consumption rate. In all honesty, I was still impressed that an Apple Watch could last as long as it did.

Since this is such a new unit, it will take some time to fully evaluate the expected battery life of the watch. It is clear that GPS sports watches will last much longer. I had a COROS Vertix 2 on my other wrist to serve as a standard to measure by and it only lost 5% of its battery over this same 2 hours and 40 minutes.

Apple is clearly going after the rugged sports watch market with the Ultra, but I don’t think it’s nearly as good, yet. GPS sports watches last for weeks — not days, have a plethora of metrics available to track during the workout, include offline mapping so you can use them for route guidance, and are just as rugged as the Apple Watch Ultra for less.

One other area that I find lacking with the Apple Watch Ultra when compared with GPS sports watches designed for athletes is the lack of web-based or desktop access to the Apple Watch data. You can export the data into a third-party app, but Garmin, Polar, and COROS have excellent websites where you can dive into the details of the data, create and sync training plans, and develop reports to help you train and excel in your activity — from virtually any device.

I was pretty nervous about taking my $800 Apple Watch Ultra out on this grueling Tough Mudder event, given all of the crawling, climbing, and other physical obstacles I had to tackle. To my surprise, it held up really well and I still cannot believe that the display is flawless. I tip my hat off to Apple for making a rugged device with premium materials that actually does hold up well under tough conditions.

What I like a lot about the Apple Watch Ultra is that while it’s powerful enough to get through the most intense environments, it’s just as reliable as a standard smartwatch. This duality is perfect for folks who want the best of both worlds. As for me, I’m pretty happy with GPS sports watches like the Garmin Enduro 2 and COROS Vertix 2, so the Apple Watch is unlikely to knock them off of my wrist.

The Apple Watch Ultra is a solid smartwatch, but there are other options out there too. If you don’t have an iPhone, the Watch Ultra isn’t an option, so here are alternatives for Android users as well as for iPhone users.