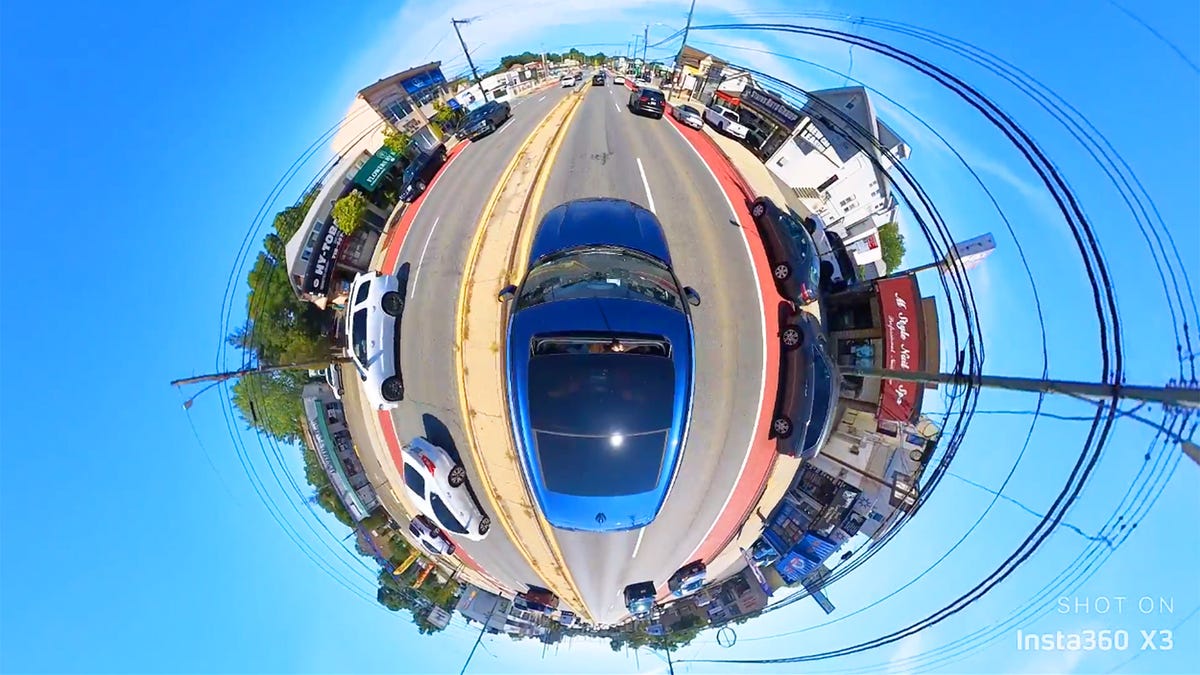 Insta360 has been on an absolute tear lately, churning out cameras as if supply chain issues were non-existent. From the gimbal-like Link webcam to the modulating One RS that my colleague Matthew Miller tested earlier this year, the company clearly doesn’t have any shortage issues with components — or ideas.

Whether you’re a professional or a beginner, the X3 brings a lot to the table for all to play

Next in line to carry the torch is the Insta360 X3, the successor to last year’s One X2. Insta360 says it’s doing away with the ‘One’ branding now which, in a market full of complicated names like GoPro Hero 11 Black and DJI Osmo Action 3, is a very welcome change.

While the X3’s naming scheme has gotten smaller, everything else with this year’s model is all about being bigger. Bigger display. Bigger camera sensor. Bigger battery. Bigger price. So whether you’re a seasoned content creator, or just starting to venture into the action camera space, Insta360 is making a compelling case for why you should buy the X3 over everything else.

This is generation three of Insta360’s fun-sized Snickers bar of a camera and, undeniably, its most refined design yet. The frame measures about four inches tall and a little less than two inches wide, making the X3 adorably compact to hold, swing around, and bite on (I’ll explain later, and it has nothing to do with the Snickers reference.)

The exterior is gilded with a rugged blend of rubber and texturized ridges which assures you that the X3 can hang in the toughest outings and/or within the slipperiest of fingers. Every compartment that borders the centerpiece is buckled tight and water resistant, yet surprisingly accessible with a simple pluck. (Long fingernails not required.) That means charging and transferring data via the USB-C port is fast, and swapping out the removable battery and MicroSD card is convenient.

The biggest changes with the X3 are the new half-inch 48MP sensor and 2.29-inch touchscreen display. The former delivers improved image quality and dynamic range, allowing the action camera to capture sharper and more color-accurate footage — even on the brightest days. This comes at the expense of a heavier body (180g) and a camera lens that bulges just a little further out.

As for the new display, the advantages write themselves: You can now see more from the viewfinder when recording, there’s greater real estate for gestures and tap controls, and gone are the days of squinting at that small, circular display to review your 360° masterpieces.

The X3 also introduces three new buttons: one on the bottom left to start/stop recordings, one on the bottom right to swap between front and back cameras, and one on the right edge for camera mode presets. For ergonomic reasons, I’d like the record button to be a little higher, or even placed on the side for a thumb press.

Most users should find the X3’s 360-degree video recording the most useful, especially for how easy it is to modify, edit, and reframe the shots in “post”. This year’s model caps out at 5.7K resolution at 30fps, with the 4K resolution supporting up to 60fps.

Don’t be fooled by the numbers, though. A 360-degree video at 5.7K resolution technically compresses into 1080p, meaning footage won’t be as pixel-perfect as, say, movies on a 4K TV. Instead, you’d be wise to upscale the 1080p content into 4K after the fact.

There’s also a single-lens mode for front or back-facing shots and slow-motion capture at up to 4K/120fps.

Numbers aside, the image quality from the X3 has generally looked impressive. I made the mistake of not turning on Active HDR for my initial batch of outdoor shots, but even then, my footage in broad daylight wasn’t too blown out or lost of color. Here’s a compilation of various shots, angles, and post-processing effects that the X3 is capable of. (Spoiler: They’re quite magical.)

It’s no skydiving montage but I’d say the recordings came out great, especially when all I had to really do was hold the X3 up, hit the record button, and let the camera take care of the rest. Remember, it’s a 360-degree video, so no matter how the camera is orientated, you’ll be able to crop, reposition, stabilize, and frame the footage just right in the post-edit. It’s a very foolproof format, which professionals and first-time users can appreciate.

There’s a slew of first-party and third-party accessories that can enhance the X3 experience, but the one that I kept going back to was the invisible selfie stick. As the name implies, footage that is captured with the accessory attached automatically hides it from view — like in the car scene of the video sample. You can still see its shadow from certain angles but the camera is generally reliable at cropping the selfie stick away from the final product.

For first-person shots, like when I was riding my bike up the hill, you can either prop the X3 onto a head or chest rig or, get this, literally hold the bottom half of the camera with a mouth mount. (You can technically bite the camera to keep it in place too, but I wouldn’t recommend it.)

Putting the ‘art’ in artificial intelligence

Insta360 prides itself as a software company — not a camera company — for good reason. The Insta360 software experience is full of whimsical video filters, editing functions, and endless opportunities to turn your standard 360° (or 180°) footage into something more.

All of that is powered by Insta360’s AI technology, a series of back-end processing that intelligently assembles raw footage in the most presentable manner. During my briefing, Insta360 made sure that nothing more was shared. From the app’s ability to intelligently pan the video so that all the action is framed properly to the various Shot Lab filters that can literally replace the skyline with Van Gogh’s Starry Night, there’s clearly some kind of wizardry happening here — and the company wants to keep its spellbook under the wraps.

What impressed me the most about the software experience was the ease of use. The mobile editor is not as extensive as professional services like Final Cut Pro and Adobe Premiere Pro, but I was surprised to find all the essentials. In fact, the simpler interface of Insta360’s editing suite (shown above) made setting keyframes, speed ramps, and jump-cuts, all possible from the palm of my hand. I didn’t need to whip out a MacBook Pro to cut down the high-resolution, 360° footage; everything was done right on a smartphone.

Sure, the export times can be a few seconds faster, and applying ShotLab filters and effects can add another minute or two to your workflow. But for how effortless it is to turn raw video into shareable content, the wait is certainly worth it.

During my two weeks of testing the Insta360 X3, I found the camera capable of lasting two to three days per charge. Obviously, battery life boils down to how often you’re recording, video resolution, whether it’s 360°, 180°, or single-shot content, and so much more. Still, the endurance numbers are a healthy step-up from the One X2, which had a smaller 1,630mAh capacity and held up for about a day less.

I will never forget my first experience using a 360-degree camera. The Samsung Gear 360 which, to this day, collects dust in my treasured tech drawer, was slow, janky, expensive, and absolutely mesmerizing for photos and video capture. It was such a shameless device that overheated by the second, but the output — all that 360-degree, all-you-can-see goodness — made any defective behavior negligible.

Why am I telling you this? Because using the Insta360 X3 has brought back all of those fond memories, minus the bad bits. It’s the second coming of my honeymoon phase with 360-degree cameras, and I’m even more blown away this time around.

Whether you’re a professional or a beginner, the X3 brings a lot to the table for all to play. The $449 price is fair, especially when you consider all the fun and practical video features you’re getting, and how they stack up to GoPro and DJI’s $300-$500 action cameras. Just make sure you have a MicroSD card that’s sufficient enough to store all those 360-degree videos; you’ll probably capture more than you think.

Besides the Insta360 X3, here are some worthy alternatives to consider:

My ZDNET colleague Adrian Kingsley-Hughes calls the GoPro Hero 11 Black the “world’s best action camera”. Perhaps it’s the color-rich video recording or the exceptional video stabilization that’s become synonymous with the GoPro brand. There’s no 360-degree recording with this camera, but it’s a compelling option for $399.

For even more flexibility, check out Insta360’s ONE RS. It’s a modular gadget that lets you swap out camera lenses for all kinds of shooting conditions. This plug-and-play feature is enough to distinguish the ONE RS from any other action camera. ZDNET’s Matthew Miller found the image stabilization and battery life just as impressive.

Clearly, there are plenty of options in the action camera space. DJI’s latest Osmo Action 3 makes a return to the compact, rectangular form factor that’s reminiscent of GoPro cameras. Naturally, a lot of the Osmo Action 3’s functionality is similar to the aforementioned Hero 11 Black, with 4K 120p video recording and HyperSmooth 4.0 stabilization to keep all the action steady.