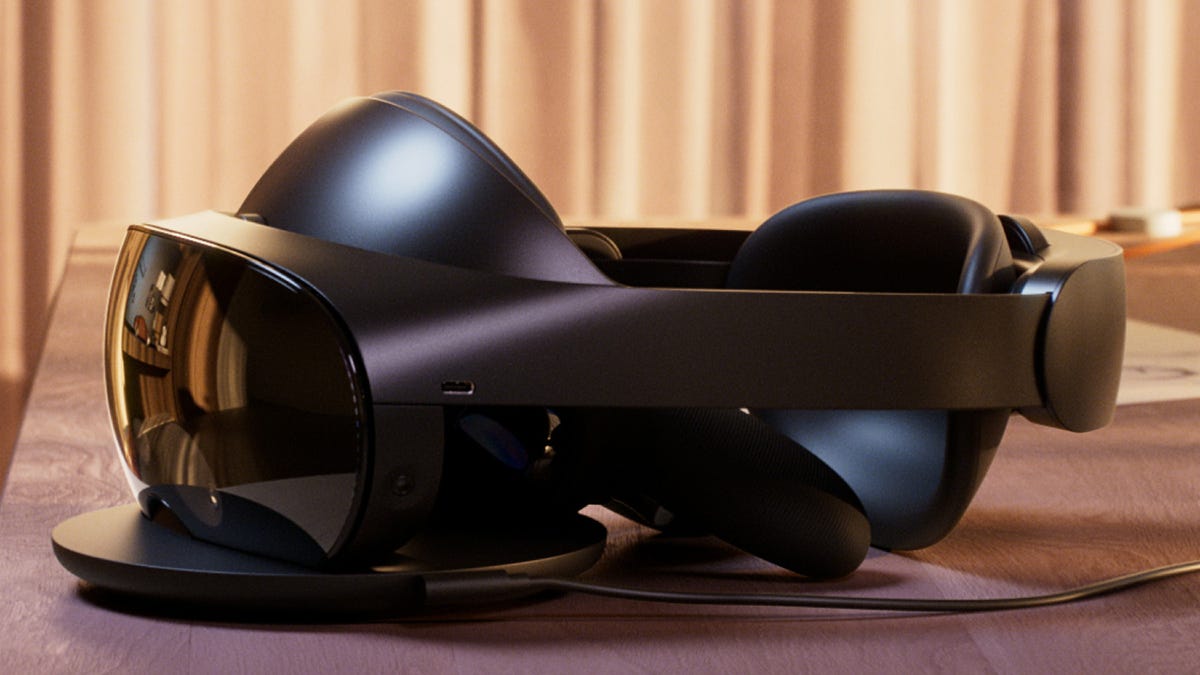 Meta’s Connect 2022 event played home to the expected debut of its Quest Pro headset. While the oft-leaked product likely surprised no one, the company’s focus on the enterprise and business applications of the new hardware might have disappointed VR gamers hoping for some cutting-edge hardware they could call their own.

Of course, the company announced a lot more than just the business-focused Quest Pro. New partnerships with Microsoft, Adobe, Zoom, and others will greatly expand the AR, VR, and Metaverse offerings for both consumers and business customers, while loftier plans for the future of AR were teased with some promising-looking prototypes.

Let’s dive into all of the most important announcements Meta and its partners made during Meta Connect 2022, and discuss how these news products, services, and initiatives will shape the Metaverse, and your place in it, going forward.

I’ve make this portion pretty brief, since I’ve already written a full article with an in-depth look at the new hardware. The Meta Quest Pro is made, from the ground up, for enterprise and business customers. While the advanced hardware features like pancake optics, improved visual clarity, and self-tracking controllers could all just as easily be applied to upping your Beat Saber game, Meta is instead hoping it will attract scores of business customers into the Metaverse for the first time.

To further expand this influx of Metaverse inhabitants, the company has tapped a slate of partners that we’ll discuss throughout this list.

This definitely represents a shift in strategy from Meta’s largely consumer-focused Quest predecessors, but it may be just the thing the company needs to turn around the doubts so many have shown over the Metaverse-driven losses it’s experienced in recent quarters.

Aside from the Quest Pro, the portion of Meta Connect 2022’s keynote that ate up the most time covered the company’s efforts to turn its Horizon Worlds offering from a meme into a legitimate social networking, collaboration, and entertainment destination in the Metaverse. As we mentioned in our Meta Connect 2022 preview, one of the posts Mark Zuckerberg made in reaction to early backlash over the simplicity of Horizon Worlds’ graphics promised updates at this event, and his company followed through on that promise.

Not only are the virtual world’s avatars getting legs, but they’re also getting a whole new collaboration framework in the form of Horizon Workrooms. These collaborative spaces are at the center of the company’s business strategy, offering a place where VR headset wearers and those simply sitting at a desk, or even using their smartphone, can come together to chat, view 3D models, collaborate, and get work done. Partnerships for this particular announcement included Microsoft, which will support Workrooms through Teams integrations, and Zoom, which will soon allow users to appear as their Meta Avatars in Zoom meetings.

More: Microsoft to bring its own apps and services to Meta’s Quest VR devices

Looking further forward, Meta hopes features like Magic Rooms (mixed reality spaces where cross-platform collaboration will allow for even more expansive meetings), virtual whiteboards (with support for the Quest Pro’s stylus controllers), and other features will convince the business world that the Metaverse really is the best place to hold its next meeting.

Aside from the Microsoft and Zoom collaborations mentioned, and seen above, Meta also announced partnerships with several other tech brands. Among these were a partnership with Accenture, which will help expand the Meta Quest and Horizon Worlds ecosystems via that company’s Independent Software Vendor Program; a deal which will bring Autodesk’s 3D modelling technology to the Meta Quest Pro; and plans with Adobe to introduce its Substance 3D modelling software to the Meta Quest Pro and Quest 2 next year.

To make it easier for companies to manage all of the hardware, apps, and services that these deployments will require, Meta announced Meta Quest for Business, a “subscription bundle for Meta Quest Pro and Meta Quest 2 that includes essential admin features like device and application management, premium support, and more.” The company hopes this singular offering, which includes contributions from some of the third-party vendors mentioned above, will ease customers’ path into the Metaverse.

While most of Meta Connect 2022 focused on Meta’s business customers, it also revealed a major new partnership with NBCUniversal. Under the terms of the agreement, Meta will deploy its Quest and Quest Pro headsets at Universal Studios parks to create VR-based experiences using NBCUniversal properties such as The Office, Universal Monsters, and the other brands pictured above.

Additionally, the company also announced that Peacock will soon be available on Quest headsets via a new app that will let users watch the entire library of streaming content on large, virtual screens.

While the event might not have had as much gaming content as many VR gamers likely hoped, there were a few noteworthy announcements in this arena. The most important is almost certainly the long-awaited VR version of accusation and murder simulator Among Us. The title will finally launch on November 10 via the Meta Quest store and Steam VR and will play largely identically to its PC originator, but with a first-person view of all the mysterious goings-on.

Meta also revealed that popular battle royale FPS Population: One will receive an expansion with Population: One Sandbox. This new mode allows players to build arenas, create modes, and tweak much of the game in new ways. Think Halo’s Forge mode or Overwatch’s Workshop, but in VR.

Lastly, the already released Iron Man VR will finally be available on the Quest 2 soon.

One of the most exciting bits of gaming news to come out of Meta Connect 2022 has very little to do with actual VR gaming. Microsoft revealed that its Xbox Cloud Gaming service will soon be available on Meta’s Oculus Quest 2. This means users will be able to connect an Xbox controller to play their Cloud Gaming titles on giant, virtual screens, while sitting in their Quest 2 home.

More: Everything Microsoft revealed at its 2022 Xbox & Bethesda Showcase

Details were sparse, and there was no release date mentioned just yet. But, the new collaboration offers a way to fulfill that dream of playing Xbox games on a screen the size of a movie theater, albeit a virtual one.

Until now, Meta had largely left the job of creating accessories for its headsets to third-party manufacturers, with a few modest exceptions like USB-C cables. That’s apparently about to change. The first of its new, planned offerings is the Active Pack for Quest 2. This add-on kit, available October 25, will include a pair of new straps to keep your Quest 2 controllers snugly in place, as well as a new, wipeable facial interface that’s better for resisting sweat than the default one that came with your Quest 2.

In addition to this near-term offering, Meta also revealed its new “Made for Meta” initiative, which will see it teaming with third-party manufacturers to bring new accessories and peripherals to its Quest headsets. No additional, specific products were shown off just yet, however.

As usual, Meta ended this year’s Meta Connect event with a segment teasing what it’s working on for further down the road. This year’s list of ambitions focused on two key areas: AR control and bringing real-world objects and people into the Metaverse.

Mark Zuckerberg himself teased a new, prototype AR headset that he hinted would eventually evolve into a product users will actually feel comfortable wearing everywhere. While we didn’t get to see the headset itself, we did get a close look at a prototype controller for it that uses electromyography (electrical measurements of muscle activity) or EMG to detect almost microscopic movements in the wearer’s anatomy.

When combined with AI-based learning technologies, the result is reportedly a wrist-worn system that can adapt to any wearer to help them control AR and VR content with barely more than a thought. The company demoed some impressive-looking AR app interactions and basic gameplay both being controlled via EMG wristbands, during the keynote.

Meta also showed off some of the ways it’s hoping to bring its fledgling Metaverse closer to the real world. This included Meta’s “Neural Radiance Field” 3D scanning technology that can use something as simple as a smartphone camera (and ample AI processing on the back end) to create convincing 3D representations of objects in the Metaverse. It also showed off an Inverse Rendering technique that can do something similar, while also applying real-world physics to the created object.

Lastly, the company demonstrated the latest version (2.0, specifically) of its Codec Avatars. These ultra-realistic Metaverse avatars were sometimes hard to discern from a live video of the subject used to create them, and should quiet all of the naysayers if they ever actually begin populating the Metaverse. That said, even Meta acknowledges that the forthcoming Metaverse population boom could be years away. However, it also showed off another phone-based scanning tech that can already create an avatar that’s most of the way there in just a few hours. No timeframe was mentioned for when either technology might achieve a practical release to the public.

We’ll be sure to keep a close eye on all of the technologies announced during today’s show and bring you updates when you might be able to get your hands on any of them.